Electrospinning is a widely used technique for the electrostatic production of nanofibers, during which electric power is used to make polymer fibers with diameters ranging from 2 nm to several micrometres from polymer solutions or melts. This process is a major focus of attention because of its versatility and ability to continuously produce fibers on a scale of nanometres, which is difficult to achieve using other standard technologies.

Electrospinning is a relatively simple way of creating nanofiber materials, but there are several parameters that can significantly influence the formation and structure of produced nanofibers. These parameters are generally divided into three groups:

Molecular weight of the polymer

Distance of the electrode from the collector

The main principle of the electrospinning process is the effect that high voltage has on a polymer solution.

a source of high voltage

High voltage (tens of kV) is connected to the end of a capillary containing liquid solution. Once the electric field intensity increases, the hemispherical surface of the liquid at the end of the capillary extends and creates a conical shape known as a Taylor cone. By increasing the electric field further, the critical value at which the repulsive electrostatic force overcomes the surface tension is reached, and the charged strand squirts out of the end of the Taylor cone. The strand of polymer solution undergoes a process of instability and lengthening, during which solvent evaporates. The fibers are then deposited on the collector. The resulting product is a non-woven fibrous layer.

In the classical electrospinning arrangement, nanofibers are deposited on the collector at random. For some applications, however, an ordered structure is more appropriate. The method used to organize the nanofibers can be influenced by the type of collector. 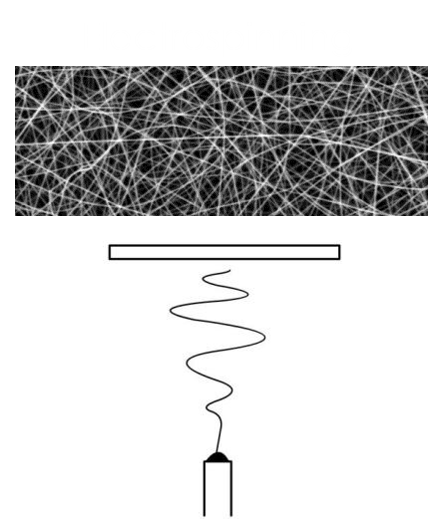 Electroblowing is a technique combining electrostatic nanofiber production (electrospinning) with airflow around the spinneret. The tangential forces of the flowing air acting on a drop of mixture contribute to the formation of the Taylor cone and to the creation of the nanofiber. In the vicinity of the emitter, optimal climatic conditions favourably influencing the spinning process are formed.

Air flow accelerates the evaporation of solvent from the solution

Electroblowing method can successfully spin solutions without the use of surfactants or other solvent systems, which are generally toxic and unsuitable/prohibited for medical applications. This is the only way in which hyaluronic acid can be spun in its native form! 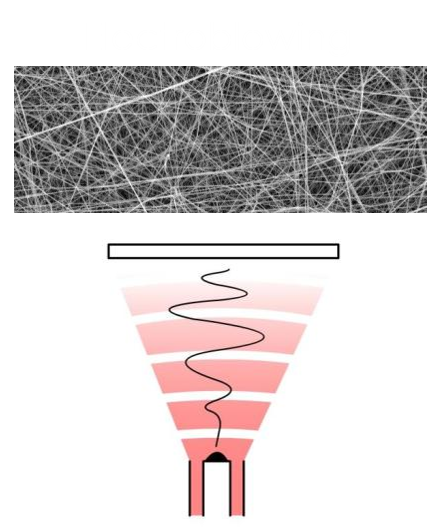 The electrospraying method and dedicated technology results in the deposition of materials in the form of small beads with a diameter of tens of nanometres (nanoparticles) to several micrometres (microparticles). In recent years, electrospraying has become a widely used nanotechnology because it can repeatedly generate very small and regular particles.

The mechanism for the creation of such nanostructures is similar to the principle of electrostatic spinning. The sprayed solution, influenced by electrostatic forces, forms a Taylor cone, from which the thread is not pulled, but the still-liquid mixture falls apart into tiny droplets. The solvent evaporates from the surface of these droplets, which are reduced in diameter until they reach nano-dimensions.

The drops are a consequence of the Rayleigh instability existing when low concentrations of solutions are used. Electrospraying is used for the deposition of thin layers of biological, organic and inorganic materials. 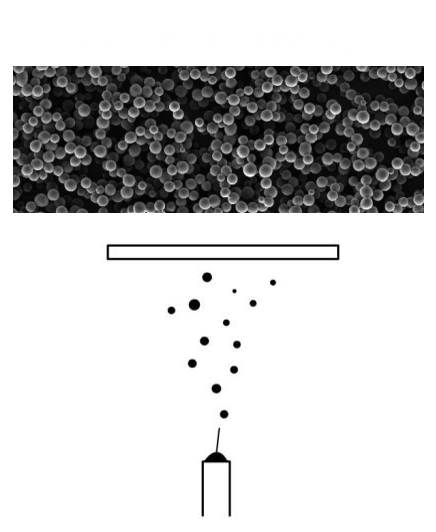